We just came back from Taiwan last Tuesday. It was a very tiring trip. The tour was pretty rush. We were given an hour @ on destination before moving on to the next destination. Most of the time we were in the bus and we stayed in different hotels every night! Well, if we were still single, I’ll consider this trip adventurous but with Joel, well, pretty tiring… =P

Overall, my little rascal behaved pretty well. He could sleep at any place and at any time. He was pretty ok with strangers too… :)

On the day we left Singapore, Joel wasn’t in a good mood cos he didn’t have enough sleep. 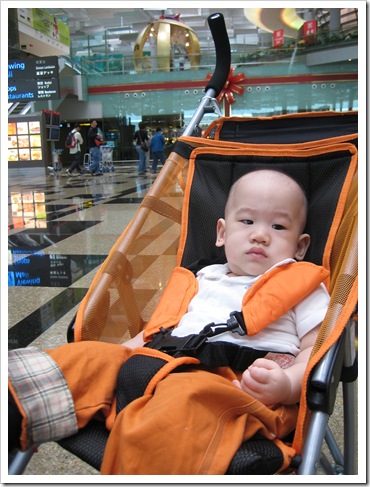 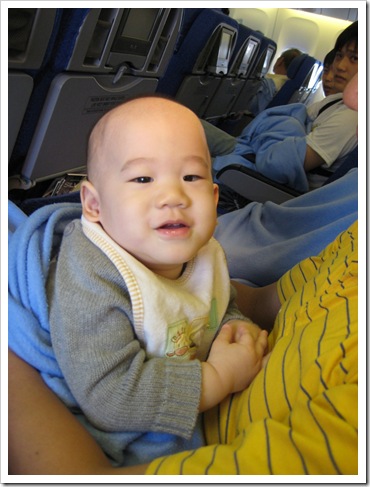 When we reached Taiwan, we were ferried to Shilin Night Market for their local delicacies… I tried almost everything… Pretty interesting food that you can find: Smelly Beancurb, Big Pancake wraps Small Pancake ( 大饼抱小饼), Fried Oyster, Pig’s organs, Fried Chicken Chop and etc…. 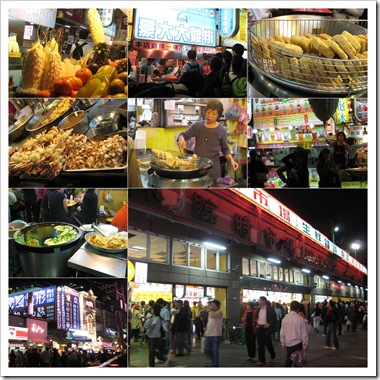 We were staying in a resort that was located @ Yangminshan National Park that called Spring City Resort. On the way to our Hotel @ YangMinShan, we passed by a few 檳榔店 and we saw sexy 檳榔妹. 檳榔 is a kind of bitternut that can help to sober drunkard and help to improve concentration. 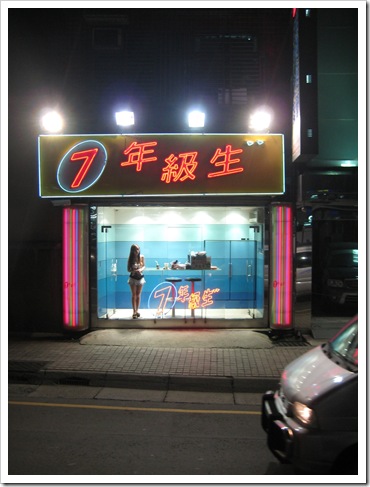 Spring City Resort is a hot spring resort. By the time we reached, it was kinda late so we couldn’t enjoy the outdoor hot spring. However, in our room, we have our own hot  spring pool! We enjoyed the indoor pool after the long day! I even used the water from the hot spring to wipe Joel. 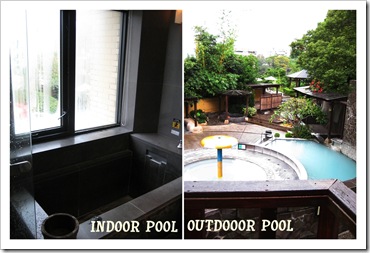 As early as 8 O’clock, we had to travel to Yeh Liu Geopark to see the hoodoo stone… It was drizzling that morning and pretty cold, so I got Joel to wear 4 layers of clothing… =P 1st layer, the thermal t-shirt, 2nd layer, long sleeves t-shirt, 3rd layer, a jumper and final layer, a winter jacket…. 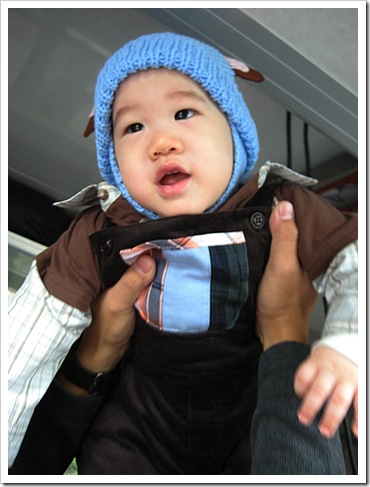 I got Betsy to make a beanie for Joel… She even sew two ears on the beanie… Very cute!!! Along the way, Joel fall asleep… When we reached Yehliu, it was so windy cos Yehliu is located beside the Ocean Pacific. 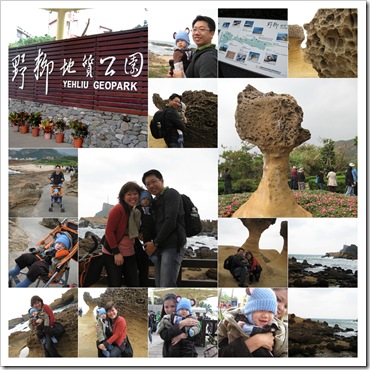 We stayed there for 2 hours, then we moved on to Jiufen, where we had to take their local bus to this place. I quite like Jiufen, it reminded me of small ‘kampung’. One narrow and crowded lane with shops at both side. These shops are selling all sort of thing, from interesting food to souvenirs Too bad, we were only given 1 hour to roam around. But I’ve managed to grab some souvenirs and also tried their local delicacies like beef noodle.

I brought Nestle Rice Cereal for Joel. It’s really convenient. I just mix the cereal with water. Thank God Joel likes it very much and finished all every meal… :) 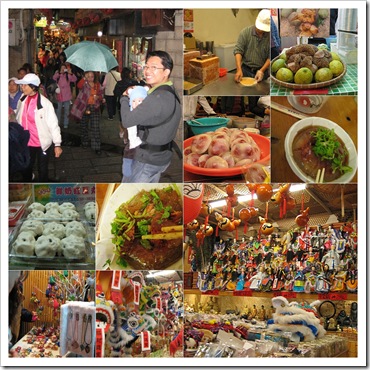 We took their local bus to a train station, Ruifeng Station to take a 3 hour long journey train to Hualien. Joel slept for 2 hours in the train. When we reached Hualien, it’s already 6pm, then we had to rush to their cultural village to catch their last cultural show @ 7:30pm!! After the show, we had our dinner @ this restaurant before check-in to the hotel @ Hualien. 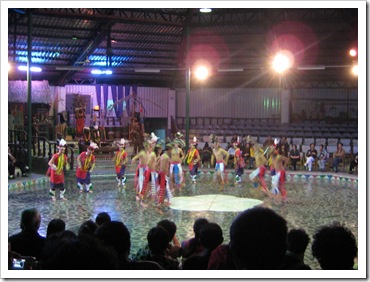 The show was so loud. But my dear Joel was sleeping throughout the whole show…. :)

The next day, we visited their national park called Taroko National Park. We went to 3 places, Swallow Grotto Trail, Tunnel of Nine Turns and the other one, I do not know what it’s called but it has a huge waterfall. I managed to capture some nice shots @ these places… 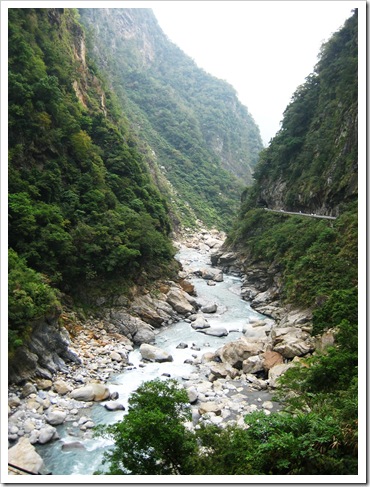 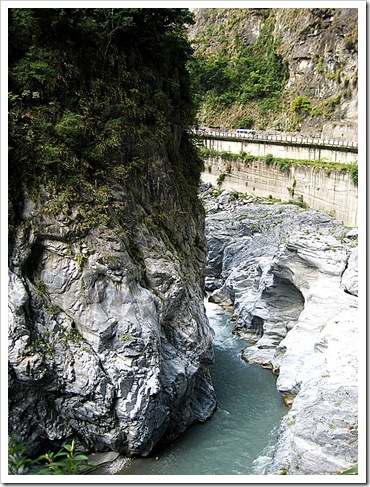 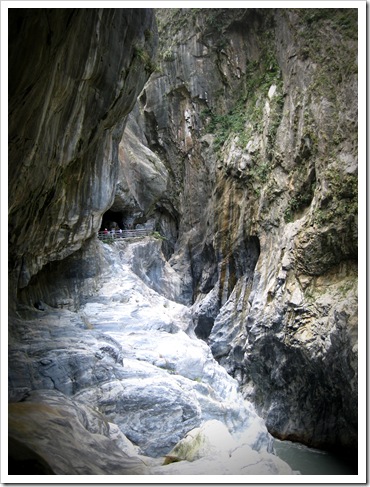 Unfortunately, my camera battery ran out of life! :( So, I had to borrow my friend’s camera to continue shooting some of these nice sceneries.

After this, we travelled 2 hours on winding road to Yilan Shangrila Leisure Farm. This place is interesting. It’s like farm stay. Once again, we were there for 3 hours. After dinner, we joined their activities like top (gasing) spinning competition, duck race and making tang yuan 汤圆. The final activity was launching of kong ming lantern where we wrote all our wishes on the lantern. I wrote that God bless our family with abundant joy, peace and love. :) 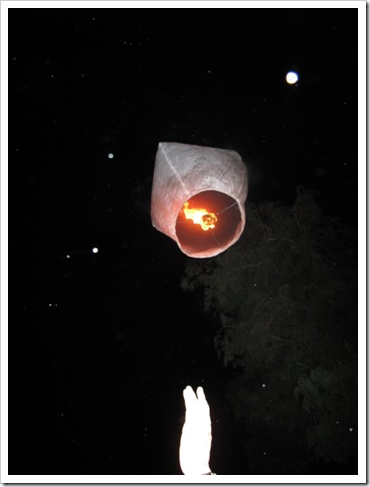 After that, we proceed to our hotel, Shangrila Boutique Hotel. This is the best hotel throughout the whole trip! The room was super big! We were given two king size beds! We joined the beds together so that Joel could sleep in the middle. Wah, that night he had huge space to roll around… LOL!! 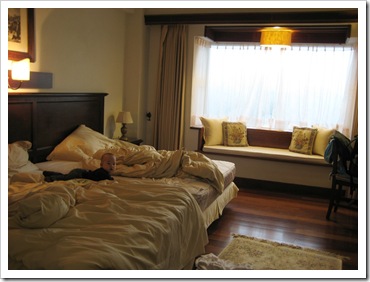 Once again, due to tight schedule, we were asked to get ready by 7am. So, didn’t get to explore the resort. :( It was a very beautiful resort. Look so vintage. I love this windmill…. It’s located right outside the hotel. 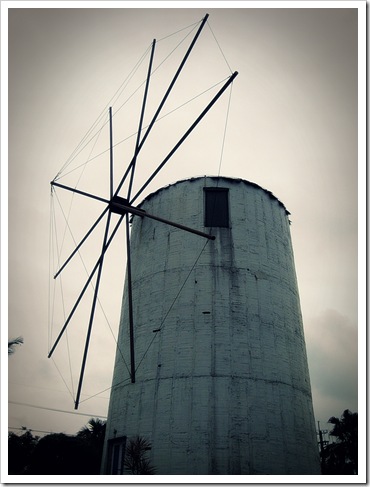 We were on the bus again. Travelling around 1 hour 30 minutes to catch the ceremony of soldier exchanging duty… Sorry, I don’t know what it’s called… :( It’s kinda boring… Later on, we went to visit a stones factory, where they produced stones like jade. At the factory, we were asked to listen to 20 mins talk how to differentiate a real ‘cat eye’ stone and a fake one… =P Kinda interesting. The real one will have a stripe down only when put under the light, but fake one have stripe all the time. ;)

Then we took 2 hours long bus back to Taipei to visit a shop that sells a lot of ‘feng sui’ stuffs… Again, sat in a classroom to listen to a short half an hour talk. Well, this time round, they talked about names. How to calculate the number of strokes in your name. For good name, usually will have 9 and 13 strokes (after adding the two names together). Well, for me, I don’t really believe this cos I only believe in blessings from God… :)

We stopped here for at least 2 hours!! After that we went for our lunch. Then we proceed to a place Wulai… Wu Lai in their Taiwan dialect means hot spring. The whole place is full of hot spring motels and also spas… 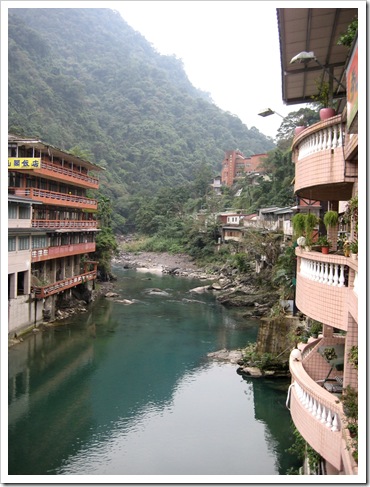 Then we had to climb this damn high staircase to take electric train. After taking the train, we had to walk and climb another set of high staircase to take cable car to travel to the mid of the hill… Then we had to walk up a few sets of staircase in order to reach to the top… Guess what can be found on the top? Well, a big pond and a resort… Initially we were wondering how they travel up cos we didn’t see any road when climbing up. The tour guide told us they can travel by small car up to the hill top via a small narrow lane. 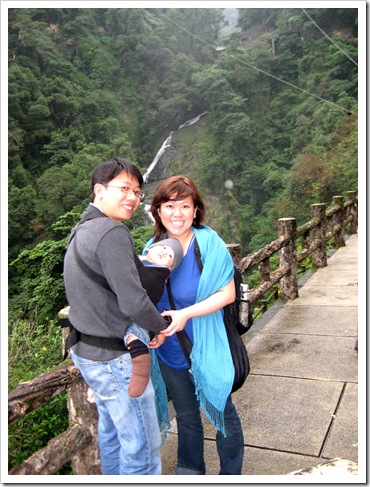 Can you see small huts above the water fall behind? We literally walked toward there!!! 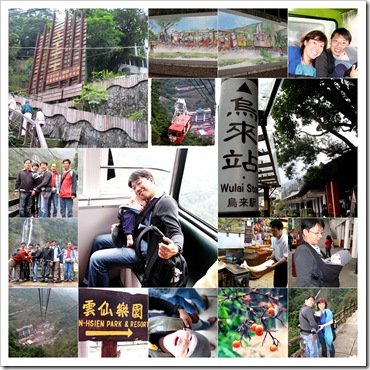 Finally, we check-in into another hotel @ ShengKeng. The 4th night was our free and easy night. We went to Ximenting, Wubu (Wholesales market) and also ShiLin Market within a night. By the time we went back to the hotel it’s already 1am in the morning. I almost shattered, both my legs were aching so badly and I was so tired that I just slept without taking my bath. Joel too… By the time he reached hotel, he had his milk and slept throughout the whole night.

Suppose to be free and easy on the last day. But last minute change, we had some program. Our plane departed @ 6pm. In the morning, around 9am, we visited a tea house to see how they brew and drink tea. According to the lady, ones must make a loud noise while drinking tea to show that the tea that served by the host is fragrant… LOL!! Then we learnt that green tea powder mix with Yakult (yogurt drink) can help to clean our intestine and help in slimming too… =P So, we bought one pack of green tea powder @ S$96!! LOL!!!

Around 11am, we visited National Palace Museum, the world's largest assemblage of priceless Chinese art treasures, one which
spans Chinese's nearly 5,000 year history.

We had our lunch at Yehliu before going to the airport. My husband’s boss treated all of us with a scrumptious seafood meal!

Hooray!! We were finally on our home… This is the first vacation that I was looking forward to go home!! 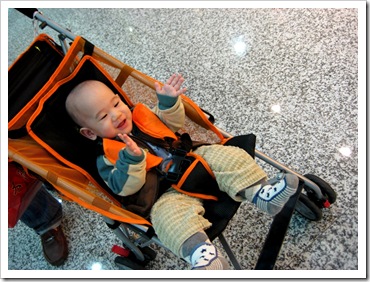 Wow! Looks like u guys conquered lotsa places! I'd LOVE the private hot spring pool too! :)

lol.. how come joel seems so happy to come back to sg?

Yea, me too... Sigh... Didn't really enjoy much cos just stayed for a nite... Next day, we were moved out quite early...

Hi Christine,
YEa!! ME TOO!!! Hahahahaha

yes the private spa pool in the room looks cool ! ^__^

ohh ya, what programe do u use to edit and crop all the photos into one big picture ?

Ouh... I miss Taiwan a lot, especially after reading ur sharing!! =p

Pretty tiring though... If I'll have chance to go, I'll make sure I'll do some homework before going... :p

Handmade with LOVE from Jullie and team. Drop us an email for inquiry. Our email address is julshandmade@gmail.com