Joel has turned 1 month old yesterday but we celebrated his full month on Sunday together with our family members and close friends.

Early in the morning, my CL (confinement lady) who we called Auntie, made Red Egg. Red Egg (红鸡蛋) signifies longevity and happiness in Chinese custom. Auntie had made 50 red eggs that morning to serve our guests that attend Joel's full month shower party. 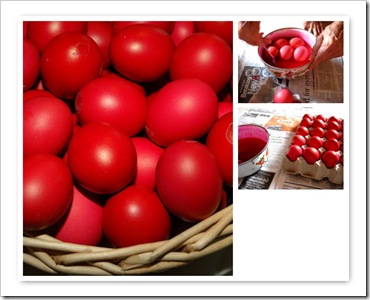 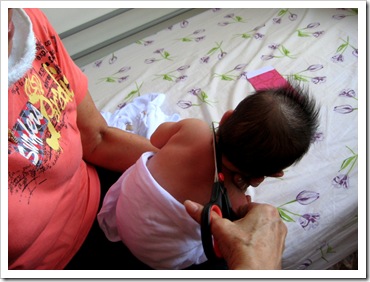 The celebration was held at my cousin's place. We rented a function hall at her condo. 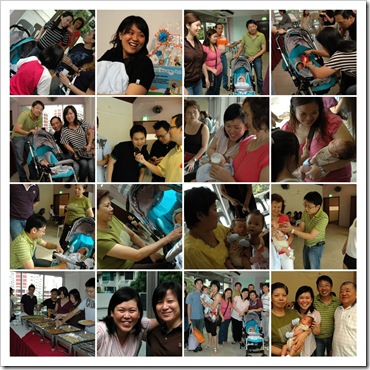 Special thanks to my in laws for preparing the vegetarian food, to my cousins for helping us out with the place, to Ngiam for taking such a nice photos, to Rei for making Joel's cake and lastly, to all of our friends & relatives for their wonderful gifts & blessings.... 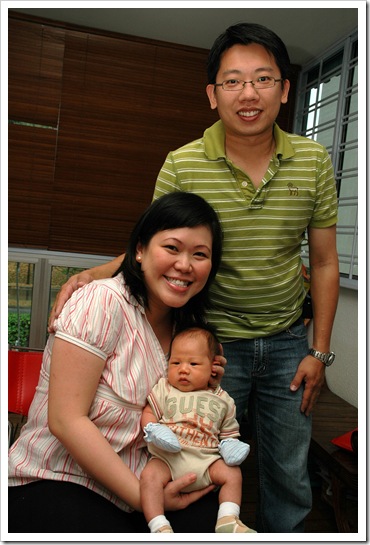 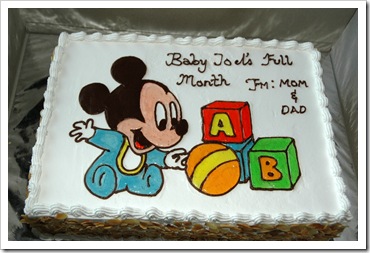 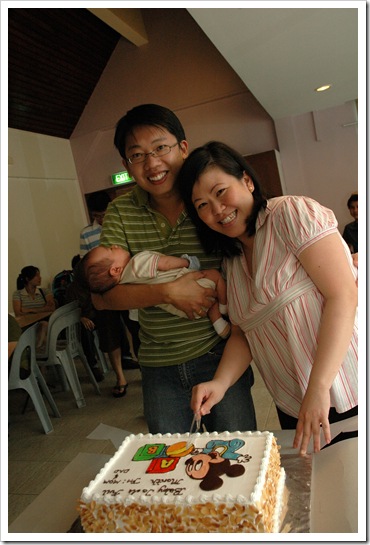 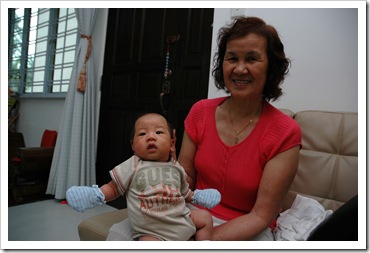 We will also like to say thank you to our confinement lady, for taking care of me and baby Joel... :) Tomorrow will be her last day and she was busy cleaning up the my place. She was suppose to leave today however, she stayed for another to help out. I'm so touched. Thanks Auntie. Both Joel and I will surely miss you very very much.

Betsy, Michelle and Dewi came over the other day to visit me and Joel. Betsy made this little booties for Joel. He wore it for checkup the next day... :) 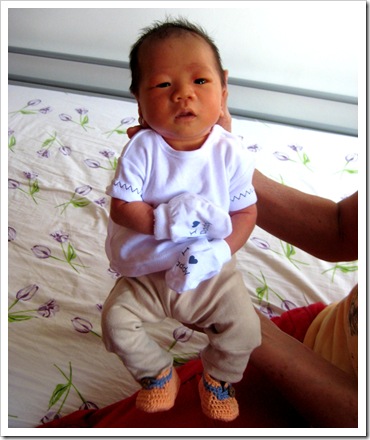 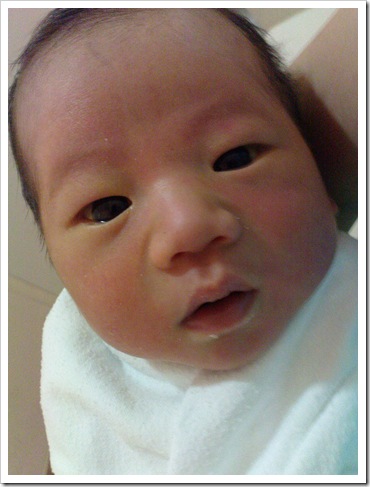 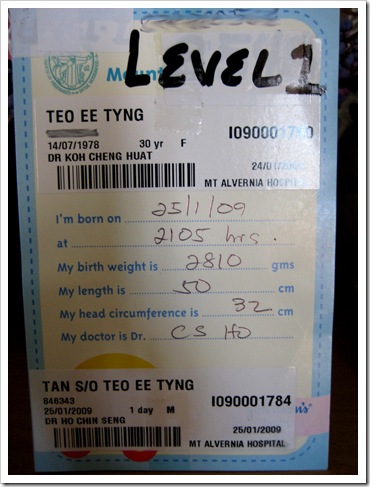 I went through a hard long labor. Joel was in a very awkward position during labor. Though his head was engaged to my cervix but his body was curved toward the left. Initially, Doc used vacuum to pull Joel out but FAILED. So, he quickly changed to forceps. When he was trying to pull baby out, he realized that baby's unbiblical cord entangled around his neck. Getting an EXPRERIENCED doctor is very important at this point. It was too late to go for emergency C-sect. My Doc quickly unwind it and pull my baby out safely. Well, poor Joel suffered few bruises here and there. So, when he was out, he was frustrated and tired at the same time. He didn't cry very loudly. Doc suggested that to keep him in ICU for a night for observation. Thank GOD he was OK.

How about ME? Was I in PAIN? Hehehe.... Thank GOD I was on Epidural. So, I didn't really feel the 'pain' throughout the labor. But I could feel the whole process of baby being pulled out. I'm sure without Epi, I'll faint!

Thanks to nurses and midwife from Mount Alvernia, They were very caring and patience. I always thought nurses from hospital were very fierce and unforgiving. But not them, they are encouraging and they even cheered for me when I was pushing. ;) Of cos thanks my Doc, who did a great job in delivering my baby. We will like to apologize to him for rushing back to hospital after his reunion dinner. =P

Well, my dear husband was with me the whole time. He was asked to cut Joel's unbiblical cord and shouted "I AM DADDY" (X3).... 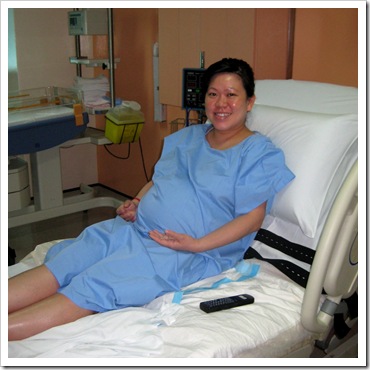 That was me in delivery suite 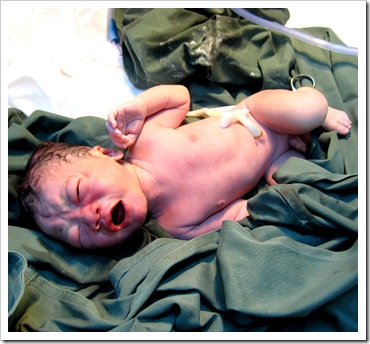 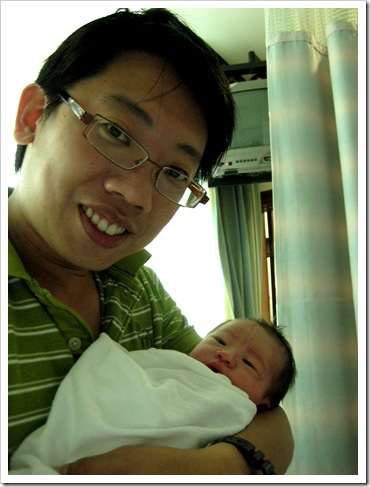 Joel with Daddy. Joel looks exactly like his dad. 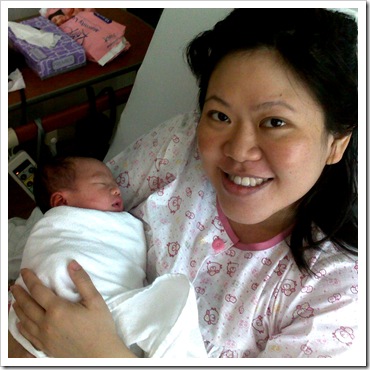 Baby Joel is really a gift from GOD. I would never thought having a beautiful child of my own.

Behold, children are a heritage from the LORD, the fruit of the womb a reward. Like arrows in the hand of a warrior are the children of one’s youth. Blessed is the man who fills his quiver with them! He shall not be put to shame when he speaks with his enemies in the gate.
(Psalms 127:3-5 ESV)

Handmade with LOVE from Jullie and team. Drop us an email for inquiry. Our email address is julshandmade@gmail.com